September 24th 1969 – 45 years ago ,together with the Royal Philharmonic Orchestra  the rock group Deep Purple performs at the Royal Albert Hall  the classic rock composition “Concerto for Group and Orchestra” of Jon Lord.

Just posted this song on Facebook and then i read two hours later that Jon Lord died today July 16th 2012 at the age of 71. Rest in Peace

Here is his song “Child in Time ”

and one of his most famous solo projects

Formed in Cremona, Lombardia, Italy , this is the brainchild of multi-instrumentalist Matt Filippini. They have released 3 albums to date:

They are notable for their guest appearances, featuring artists such as Ian Paice, Glenn Hughes (Deep Purple) Eric Bloom (Blue Oyster Cult) Graham Bonnett (Rainbow) Ken Hensley (Uriah Heep) and Bobby Kimball (Toto)  to name just a few. Italy is fast-becoming the last bastion of great classic rock, as evidenced by labels such as Frontiers Records and projects such as this one.

Here is ‘Shooting Star’ from ‘Rebel on the Run‘, lead vocals by James Christian from House of Lords

They didn’t pull up any trees when they were together, barely grazing the charts, although curiously became huge in Texas, doing legendary double-headers with the Lone star state’s own ZZ Top in the early 70’s.  But Trapeze, at the peak of their creative powers in 1972, released a fabulous album that justifies the term ‘Classic’. “YATM, WJTB’ showcased the talents of Glenn Hughes, Mel Galley and Dave Holland, who went on to join Deep Purple, Whitesnake, and Judas Priest respectively, so the musical ability is abundantly clear.  This was the last time Trapeze would record a full album with this line-up, before bassist and singer Glenn was lured away to Purple. 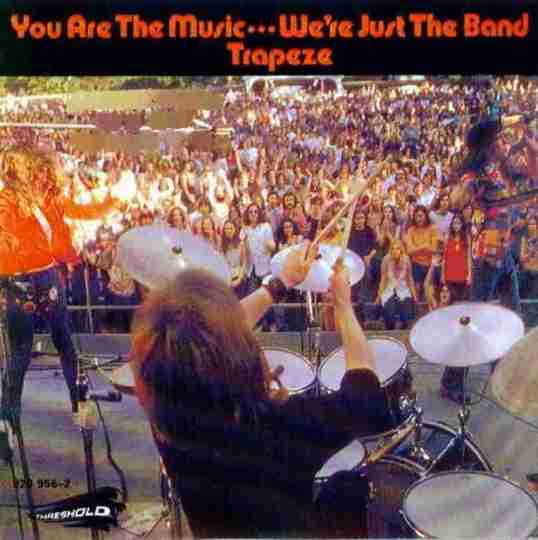 The album opens with a roar, a sledgehammer rifforama in the shape of ‘Keepin’ Time’, which alternates between straight ahead riff rock, and glorious break down funk sections that are so tight you couldn’t get a credit card between the parts. Nobody was fusing rock and funk like this before Trapeze. Just when you think you’ve got their number, you are served up the tune that has become synonymous with Glenn Hughes over the past 40 years: ‘Coast to Coast’.  It is an achingly beautiful ballad and showed a glimpse of the immense voice Glenn possessed.  His control, feel and range are effortless, and the subtle contributions from guests BJ Cole (pedal steel) and Rod Argent (Piano) enhance the track beautifully. ‘What is a Woman’s Role’ has a great laid back feel, and builds Side One of the album to it’s closer, ‘Way back to the Bone’, this is a blistering, stripped bare funk masterpiece with incredible guitar, bass and drum interplay between the band members, it just drips groove! 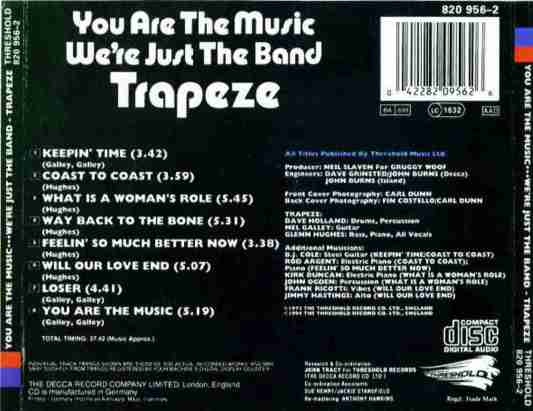 Side Two opens with ‘Feelin’ so much better Now’, and the first time I ever heard this track, I was reaching for the liner notes to see who the three black backing singers were. Well, there aren’t any. All the voices on the phenomenal chorus of this song are Glenn’s. It is just astounding to listen to, and probably goes some way to explain why I view these asinine ‘talent’ competitions that are all over the TV like a rash with such disdain. Right here, 40 years ago, was the genuine article. And you can go along and see him do it now, at 60 years old, as part of Black Country Communion, the voice still as jaw-dropping as ever. He is a living legend. The Second track on Side two almost scales the heights of ‘Coast to Coast’ on Side One. ‘Will our love End’ once again highlights the amazing contrast in Hughes’ voice. After screaming his head off just minutes before, he delivers a breathy Bee Gees like vocal harmony that tingles the spine, and guests Frank Ricotti on vibes and Jimmy Hastings with his sublime sax, just keep on bringing to the party. It’s gorgeous stuff. The lead guitar solo from the late Mel Galley is gorgeously performed, not a note too many, not one out of place, a lesson in feel, tone, and restraint, it is exquisite. ‘Loser’ is a straight ahead rocker, but has a wonderful acapella highlight from Hughes near its close, when he’s ‘testifying’, and you hear his voice in all its raw beauty. The closer, and title track ‘You are the music, we’re just the band’, has a freight train groove, which I learned a few weeks ago, and trying to play the bass and sing it at the same time, gave me new respect for a track I’ve already loved for four decades.

But don’t take my word for it, here, for your listening pleasure, is the whole album on youtube. Listen , and marvel at what these guys were doing FOUR DECADES AGO. No smoke and mirrors here, just real music.

They may not have achieved the heights with the general public, but there’s hardly a rock musician on the planet who won’t cite Trapeze as one of their favourite bands. ‘YATM,WJTB’ is a fantastic testament to these three great musicians who fused rock and funk better than anyone before or since.

Quatermass was a music trio which was founded 1969 in the UK , the band existed only 2 years and released only one album – really a – one album wonder –  !!! Their music describes the music style of Rock music in the 70´s ,  you can mention other bands like Emerson Lake and Palmer , Deep Purple or The Who , if you want to give examples for other bands of their music genre . They had one hit “The black sheep of the family ” but i prefer this one – Gemini

Search for artists, countries and genres

Search for all countries and genres here